Thanks to your partnership, we won White House support and passed legislation in the House of Representatives to stop human trafficking, raise revenue in the developing world and protect debt relief and development aid.

We now need to leap over the last hurdle: the US Senate. Please make a gift now so we have the resources we desperately need to move the Senate. Contributions to Jubilee USA are doubled now.

Beyond our 10 year campaign finally winning, we have an unbelievable series of successes to celebrate. In recent weeks:

Will you please join me and make a contribution to support our mission at Jubilee USA. Gifts are doubled now, tax-deductible and needed to move forward our incredibly urgent campaigns.

Your gift today means we can:

After we addressed the UN General Assembly two weeks ago, Presidents and Prime Ministers told me how grateful they are that Jubilee USA exists and wins for the vulnerable. When you make a gift today, it will be doubled and double our impact this year to win policies that lift and protect the vulnerable.

We Won - Eyes, Action on Senate 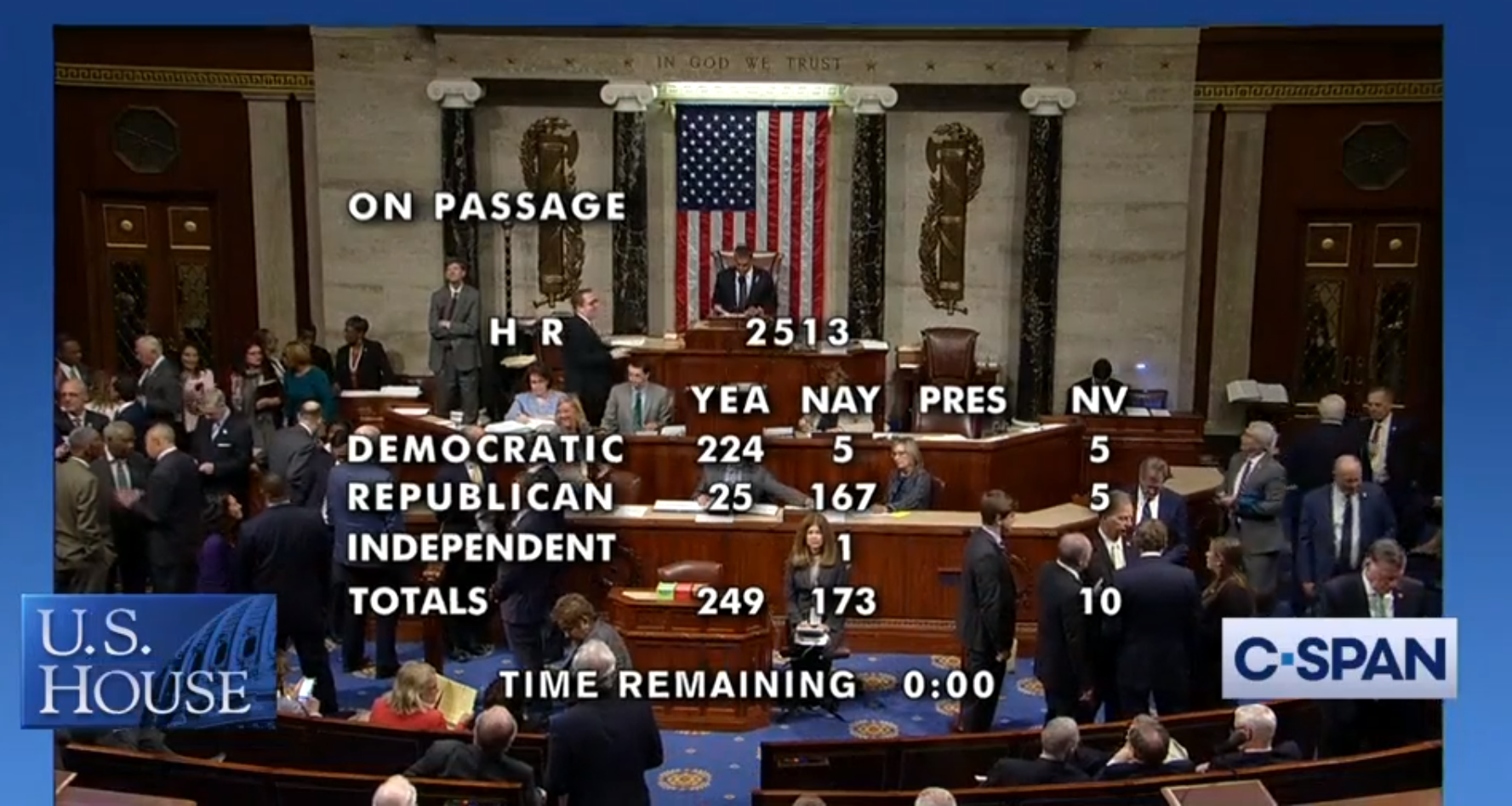 Together, we did it.

Thanks to your thousands of calls, petitions, postcards and messages - The House of Representatives passed the Corporate Transparency Act by a vote of 249-173, last night.

Our efforts together, also won support from the White House and the US Treasury.

Now - to win, we must move the Senate to pass the Corporate Transparency Act or one of several similar pieces of Jubilee legislation.

Please send an email to your Senators now.

Email your Senators and ask them to cosponsor legislation that reveals the true owners of "anonymous" shell companies. Tell your Senators that this legislation is vital to stop human traffickers, defend vulnerable communities and protect development aid and debt relief.

A decade ago, Jubilee USA found out that debt relief and development aid was stolen by dictators and corrupt officials by using shell companies. As we began our campaign, we saw that human traffickers, arms dealers and criminals who ran Medicare scams - all used "anonymous" shell companies to do their deeds in secret.

Thanks to our partnership and your continued efforts, our Jubilee USA legislation can now become law.

Please take a moment and e-mail the Senate so we can cross the finish line.


P.s. Please make a donation to Jubilee USA Network now. For a limited time, all gifts are doubled. We really need your support to keep winning and to continue our strategic campaigns.

Agence France-Presse cites Eric LeCompte on the Corporate Transparency Act 2019 after it passed through the House this week. Read an excerpt below, and click here for the full story.

Washington DC - The House of Representatives passed the Corporate Transparency Act of 2019 (H.R. 2513) by a  249 to 173 vote. The bill reveals the true owners of "anonymous" shell companies to law enforcement.

The bill now heads to the Senate, where Senators could likely move this bill or similar legislation. The White House and US Treasury pledge support for this type of legislation.

Washington DC - The House of Representatives scheduled a vote for 5:15 PM EST on the Corporate Transparency Act of 2019 (H.R. 2513). The bill reveals the true owners of "anonymous" shell companies to law enforcement.

"This legislation helps us stop human traffickers and corrupt public officials and protects development aid,” said Eric LeCompte, a United Nations finance expert and the Executive Director of the religious development group Jubilee USA. LeCompte's organization generated thousands of messages to Congress in support of the bill. “Shell companies contribute to a trillion dollar loss to the developing world every single year."

The bill, sponsored by Representatives, Peter King (R-NY), Carolyn B. Maloney (D-NY) and Tom Malinowski (D-NJ) would prevent types of Medicare fraud and stop a number of criminal activities.

Thanks to your work, Congress votes today on Jubilee legislation to stop corruption, prevent human trafficking and protect debt relief and development aid.

Tens of thousands of Jews, Christians, Muslims and people of good will - prayed and acted for Jubilee this past weekend.

Today - if we can generate enough calls on our Republican and Democratic led legislation, we can finally win a vote we've been working towards for 10 years.

With a vote about to take place on the Corporate Transparency Act, your call to your Representative can make the difference. Tell your Rep to end financial secrecy, protect vulnerable communities, prevent the profiting of human trafficking, protect aid and debt relief and ensure that poor people aren't exploited.

This vital Jubilee legislation reveals the true owners of "anonymous" shell companies to government authorities. These shell companies hide those who profit from human trafficking, dictators use them to steal development aid and debt relief - these shell companies contribute to a loss of nearly a trillion dollars a year from the developing world.

Your consistent actions on this campaign for the last 10 years made a difference. Your thousands of postcards, phone calls and e-mails in recent weeks have gotten us here today. Now - please make one more phone call so we can move this legislation in the House and then move our campaign to the Senate.

The Associated Press quotes Eric LeCompte on the global economic slowdown reported at the International Monetary Fund Annual Meetings in Washington, DC. Read an excerpt below, and click here for the full story.

Jubilee USA, a religious organization fighting global poverty, said in a statement that while the IMF outlined a number of serious threats, the recommendations for dealing with them fell short.

Eric LeCompte the Executive Director of Jubilee USA, a religious development organization, releases the following statement on the IMF and World Bank Annual Meetings and the Communiqué of the International Monetary and Financial Committee:

"The International Monetary Fund released a series of frightening reports this week and expressed great concern for the global economy.

"The Fund warns of corporate debts that are so high, they can be a recipe for global financial crisis. Risky investing, trade tensions and developing countries borrowing too much are serious concerns for financial stability.

"Because of the serious concerns that the IMF is raising, their crisis prevention recommendations fall short of what we need to stop the next financial crisis. We must urgently move forward with both crisis prevention and resolution processes such as a global bankruptcy mechanism.

"While the IMF bolsters lending resources, it seems this is happening at the loss of quota reform. There is a critical democratic need for voting power to be more equally distributed among IMF members."

"We are seeing strong warnings of a global financial crisis," shared United Nations finance expert and Jubilee USA Director, Eric LeCompte. Since 2010, LeCompte monitored IMF reports and meetings. "The Fund recommends more transparency around risky investments and corporate and country debts. But these recommendations might be too little and too late."

On Tuesday, the IMF downgraded global economic forecasts, calling the future of the economy, "precarious" and "uncertain," with the release of the 2019 World Economic Outlook Report. On Wednesday, the IMF Global Financial Stability Report issued concerns over high debts and risky investing. The reports raised fears over trade tensions, revenue loss and that developing countries are borrowing too much.

"The IMF got Argentina's debt sustainability wrong and they failed to prevent most of their financing being lost to capital flight," said LeCompte. "In Ecuador there seems to be a disconnect between IMF leadership preaching corporate transparency and IMF technicians advancing austerity and corporate tax cuts."

Beyond the debates, consensus seems to be growing for Somalia debt relief.

"We are optimistic about debt relief for Somalia which is one of world's poorest countries," stated LeCompte who is moderating a High-Level Somalia Annual Meeting Panel. "There seems to be strong support among all stakeholders to alleviate poverty and build a brighter future for Somalia."

Washington DC - The International Monetary Fund warns of growing financial instability as a result of high debts and risky investing in the release of the IMF 2019 Global Financial Stability Report. The report raised fears that developing countries are borrowing too much.

"The Fund is recommending more transparency and greater surveillance of corporate and country debt," shared United Nations debt expert and Jubilee USA Director, Eric LeCompte. "While these recommendations are good, they fall short of the policies we need to prevent the next financial crisis. We need a global bankruptcy process. We need global laws on responsible lending and borrowing."

Yesterday, the IMF downgraded global economic forecasts, calling the future of the economy, "precarious" and "uncertain," with the release of the 2019 World Economic Outlook Report.

"We all wish the latest reports from the IMF were about sunshine and rainbows. Unfortunately, this is the most bleak economic outlook report that I've seen from the Fund," noted LeCompte who monitored IMF reports since 2010.

Friends, Thanks to your partnership, we won White House support and passed legislation in the House of Representatives to stop...
Read More