"What's most striking about the report is that we are looking at economies declining both in wealthy and poor countries.

"Because the pandemic is impacting so many developing economies, advanced economies face supply shortages.

"The lack of access to vaccines in developing countries means that we are experiencing economic shocks in wealthy countries.

"Vaccines are a priority and proactive policies to deal with the global debt and health crises are essential for a return to sustainable economic growth."

Kenyan Newspaper Nation quoted Eric LeCompte in an article discussing Kenyan Presient Uhuru Kenyatta's address to the United Nations Conference on Trade and Development in Barbados. Read an excerpt below and the full article here.

In Barbados for the second time in two years, the President has used the visit to also reiterate his call for supportive debt relief and vaccine access for poor countries, arguing they will be the two most important areas to help the world beat back the pandemic.

Last week, more than 250 civil society activists and organisations wrote an open letter to the IMF, asking that the allocation be increased to $3 trillion and that “economies are in less need of SDRs given their access to a wider array of monetary and financial tools for the response and recovery.”

“Wealthy countries received more than $400 billion of the relief aid while developing countries received around $235 billion,” said Eric LeCompte, executive director of Jubilee USA, one of the NGOs that appended their signature on the open letter.

“Wealthy countries can't use the special currency and should donate it to poor countries being ravaged by the pandemic.”

"In the face of the pandemic, we are seeing progress on corporate and digital taxes,” said Eric LeCompte, the Executive Director of Jubilee USA Network. "Questions remain on whether or not we can agree on a high enough tax rate and to what degree developing countries will benefit."

.Members of the OECD/G20 Inclusive Framework on Base Erosion and Profit Shifting signed the “Statement on the Two-Pillar Solution to Address the Tax Challenges Arising from the Digitalization of the Economy." The agreement updates and finalizes a reform of tax rules proposed in July.

As poor countries struggle with revenue to confront the coronavirus crisis, the IMF announced it will extend debt payment relief for 24 countries through January 10, 2022. Additional relief may be extended to April 13, 2022, if the IMF's Catastrophe Containment and Relief Trust has resources.

"Expanding debt relief for the poorest countries is urgently needed,” stated LeCompte, a United Nations finance expert who worked on the IMF's debt relief trust. "The cancelled debt payments mean that needed funds can be directed to pandemic response."

The International Monetary Fund (IMF) estimates that global economic growth in 2021 will be slightly lower than the previous forecast in July which was projected to grow 6 percent. The downward revision was due to debt and inflation risks as well as different economic trends after the Covid-19 pandemic.

IMF Managing Director, Kristalina Georgieva, in an online speech at Bocconi University, Italy, Tuesday (5/10), said the global economy was rebounding, but the recovery was limited due to the vaccination gap.

"We calculate the economic loss in the trillions if developing countries cannot access a vaccine," LeCompte said.

The International Monetary Fund (IMF) estimates that global economic growth in 2021 will fall slightly below July's forecast of 6 percent. IMF head Kristalina Georgieva said the downgrade took into account the risks associated with debt, inflation and different economic trends after the Covid-19 pandemic.

Even as the global economy bounces back, according to Georgieva, the pandemic continues to limit recovery. One of the main obstacles is the high vaccination gap rate. This is due to limited access to vaccines.

The East African mentions Eric LeCompte on the civil society open letter to the IMF calling for more emergency currency allocations and redistribution of reserves from wealthy economies to developing ones. Read an excerpt below, and click here for the full story.

President Uhuru Kenyatta on Tuesday reiterated his call for supportive debt relief and vaccine access for poor countries, arguing they will be the two most important areas to help the world beat back the Covid-19 pandemic.

The President had been calling for vaccine equity and debt relief in most of his recent speeches, a stance now adopted by the African Union. Developing countries argue that debt relief, emergency funding more trade and access to vaccines will protect them in spite of poor health care systems.The International Monetary Fund, for example, created an emergency fund, known as the Special Drawing Rights, to help countries fight the pandemic crisis.

But critics have argued the SDRs worth $650 billion, which are based on quotas of IMF members, have benefited developed countries more. Last week, more than 250 civil society activists and organisations wrote an open letter to the IMF, asking that the allocation be increased to $3 trillion and that “economies are in less need of SDRs given their access to a wider array of monetary and financial tools for the response and recovery.”

They argued that it was “essential that the recent allocation be quickly followed by rechanneling a significant portion of advanced economies’ SDRs to developing countries,” an idea IMF Managing Director Kristalina Georgieva has agreed could help. “Wealthy countries received more than $400 billion of the relief aid while developing countries received around $235 billion,” said Eric LeCompte, Executive Director of Jubilee USA, one of the NGOs that appended their signature on the open letter. “Wealthy countries can't use the special currency and should donate it to poor countries being ravaged by the pandemic.”

Inflation pressures, a key risk factor, were expected to subside in most countries in 2022 but would continue to affect some emerging and developing economies, she said, warning that a sustained increase in inflation expectations could cause a rapid rise in interest rates and tighter financial conditions.

Georgieva said central banks could generally avoid tightening for now, but they should be prepared to act quickly if the recovery strengthened faster than expected or risks of rising inflation materialized.

"Too many countries cannot combat the pandemic because they aren't bringing in enough revenue and are struggling to pay their debts.

"Georgieva is concerned about food prices. They've gone up by 30 percent. Vulnerable people are losing access to vaccines.

"Georgieva's speech highlights the growing concerns with developing countries not getting enough vaccines.

"We are counting economic losses in the trillions if developing countries can't access vaccines.

"Countries struggling with too much debt and lack of access to vaccines will come back to haunt all of us. All countries can face further economic shocks and new virus variants."

Washington DC – An investigation into more than 11 million private financial documents show hundreds of public officials in 90 nations using schemes to hide wealth offshore and avoid taxes. The International Consortium of Investigative Journalists released the Pandora Papers in partnership with the Washington Post and 600 journalists in 116 countries.

"The Pandora Papers provide a window into a secret world where the rich and famous can avoid paying taxes," noted Eric LeCompte, a United Nations finance expert and  Executive Director of the religious development group Jubilee USA. "Tax avoidance is part of the reason that too many countries lack the resources to fight the pandemic."

A trillion dollars leaves the developing world annually through crime, tax evasion and corruption. The leak shows how these monies increasingly land in accounts in the United States.

In January, Jubilee USA capped a decade of advocacy with the passage of the Corporate Transparency Act. The law requires the owners of US companies to disclose their true identities to the Treasury. In June, President Biden elevated the fight against corruption to a national security priority and mandated an inter-agency review to make recommendations.

“President Biden is on the right track as he pushes greater transparency in the global financial system,” shared LeCompte.

“Developing countries can use the emergency aid for healthcare, social programs and protecting the environment,” added LeCompte.

In a letter sent to the G20 organized by Jubilee USA Network and Latindadd, 250 organizations propose guidelines for wealthy countries to donate their Special Drawing Rights to developing countries.

“Wealthy countries recovering from the pandemic don't need the currency, while poor countries need the aid for vaccinations and the growing amount of people living in poverty,” said Aldo Caliari, one of the letter’s organizers and Senior Director of Policy for religious development organization Jubilee USA Network.

“The pandemic revealed all developing countries, no matter their income, are vulnerable,” stated United Nations finance expert and Jubilee USA Executive Director Eric LeCompte. "The worst job losses and poverty increases during this crisis are taking place in developing middle-income countries, which are most of the world's countries," continued LeCompte. "The IMF and G20 need to support more options to get Special Drawing Rights to help these countries."

The letter states SDRs can finance health, education and efforts to protect the environment.

Watch the Civil Society Policy Forum event "Making the Most of Special Drawing Rights: Approaches to Maximize Impact and Create a Sustainable and Just Recovery" here. 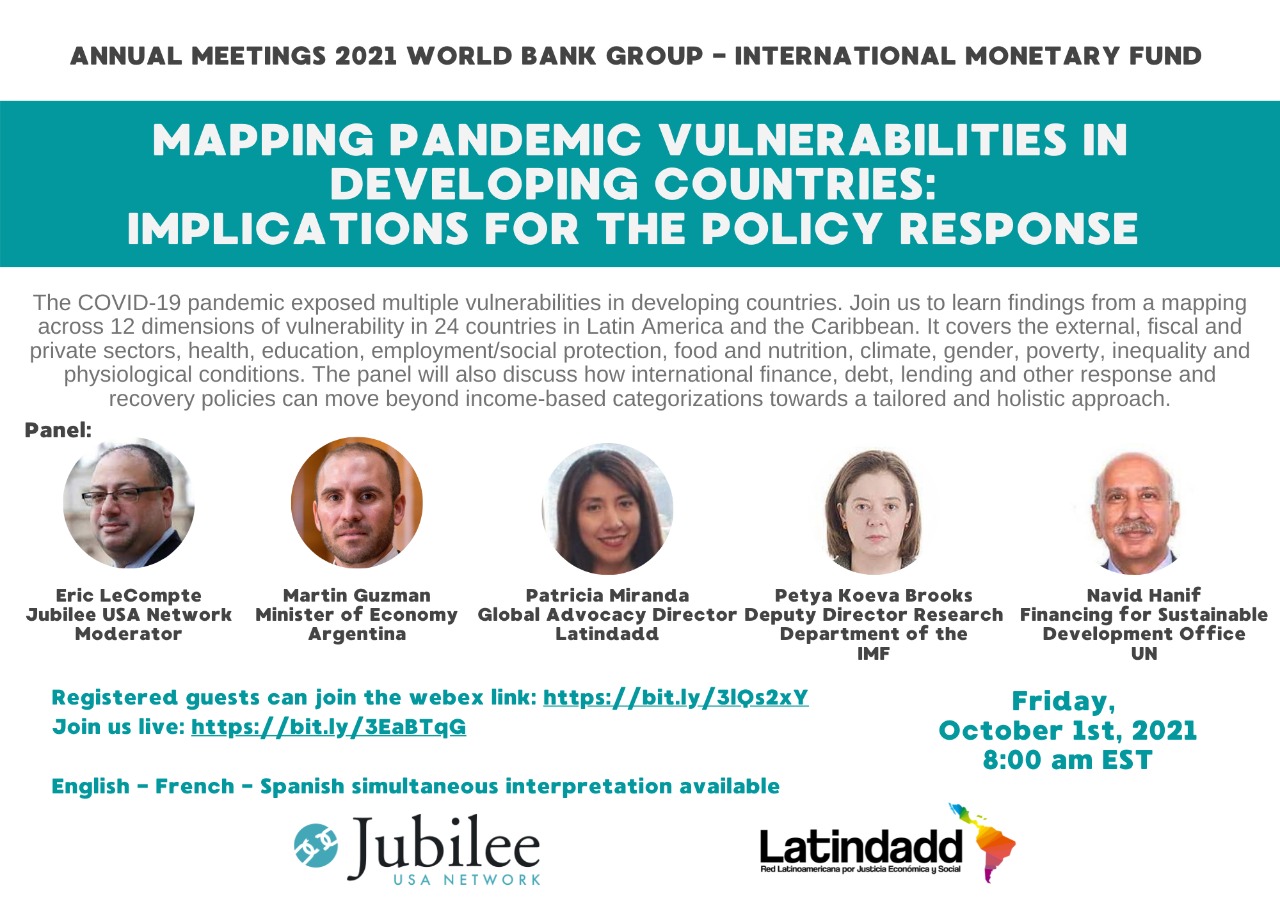 Everyone can watch the livestream here.